3 cups of Coffee and 3 budding Photographers!!

That describes all the fun "we" had at Wayanad. Here Wayanad I come again. 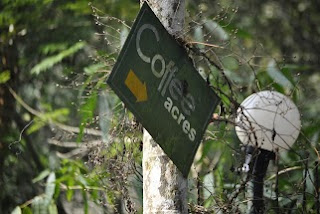 It was Unplanned,not forseen, a never-dreamt of event.A friend DB had made a vague reservation at a wild resort in Wayanad - "Coffe Acres". I shall not forget to mention that it was YD's elaborate research on the resorts that really helped. Yo!! 3 Cheers. She will be the official research specialist henceforth when we plan a trip. You hearing? 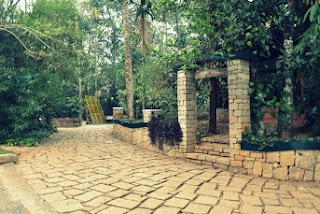 DB & DK reached Bangalore early Saturday morning. The Chennai mail got them here by 5. As always the religious, loyal and reliable Indian railways, one of the trains had to be late. This time it was the one from Hyderabad. The train was delayed by an hour.


The always lazy YD, had taken the initiative this time to make this trip possible. All of us needed this well deserved break from the stiff, congested and lifeless urban crawl. It was undoubtedly lovely and exciting.

The whatsapp exchanges, phone calls and the wait to meet college friends was not just nostalgic but more to that. The plan was to start by 6:30 AM hoping to reach the destination by noon. Now, with the lazy bumbs around do you think it is ever possible. Excuse me! Two facts to be noted here:
a) We were meeting after a long time - High priority to catch up on all lost talks.
b) The hyderabad train was delayed. Oooh!

Mr Prakash, driver for the trip was waiting at the railway station in Bangalore to pick up the couples from Chennai and Hyderabad. Poor chap he had made it there by 6 AM in his super Innova. Simple and silent describes all of him.

YD, me and SV were waiting for the rest at my place. And they arrive. Sipping hot ginger tea was a great start for the fresh morning. We finally set for the trip still not sure of the destination. Coorg, Bandipur, Mysore.. options popped up. But it was good we stuck to the intial plan - Wayanad.

Finally we start...
Crossing RVCE brought all the memories back in a flash ~ DL(Dreamland), Kool Corner, IT department, Canteen, Samadhi(yeah we have one in the campus)!! 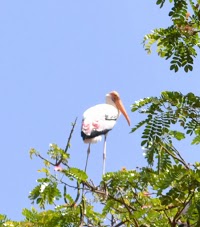 YD's dad had given us a great idea of visitng Kokkare Bellur. Having started late , we thought a little detouring should not cost much. This indeed turned a major highlight of our trip. We found pelicans - lot of them this season. The shutterfreaks went mad photographing them in all possible modes. 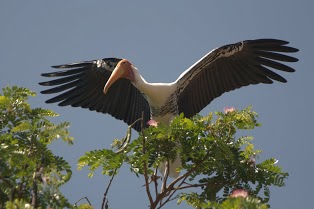 Hmmmph! A bright sun over the head was dehydrating all of us. A break for lunch at mysore - We could have had 3 meals in the time they took to serve us a couple of rotis , dal and curd rice. Service can be adjectivized as a superlative of poor. Crazy YD and DB ordered a plate of green salad. Oh that was just a few slices of tomatoes cut in a hapazard way with a dash of onions and cucumber. It looked like the server literally threw it on their face. Thank god they did not order the Maharani Salad which was on the menu.

Enroute to Coffee Acres on the main road of the jungle we spot a couple of deers, stags and elephants. The weather turned pleasant as we entered the streets of Wayanad. RJ's GPS directed us to Coffee Acres. 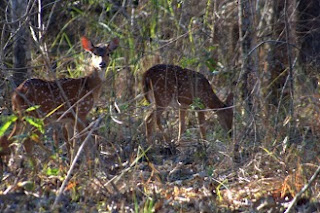 Cottages amidst the green coffee plantations drifted us to a different world altogether.  An expensive dinner in a homely style coupled with lot of fun brought the evening to an end. Another young group of all boys - danced to the tunes of local music around the bonfire. 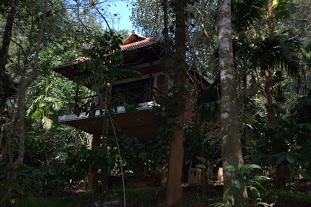 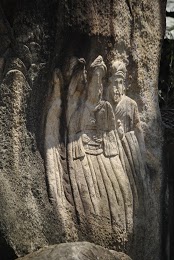 High hopes of waking up for an early safari next morning went for a toss. Cameras clicked the morning dews, surrounding greens and a few romantic portraits of the couples.
Plan changes ~ Edkal caves to be visited before the Safari at 3pm. 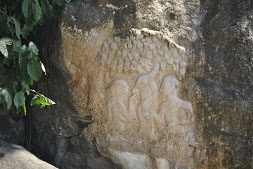 Oh that cave expedition did not happen!! ~ short of time. We made it till the entrance though. :(


Safari was no good either. Only a sight of a bison that almost resembled a huge Jersy cow on the streets of Bangalore is what we got to see. The trees were dry, the season and the timing was not apt for a safari. Bad luck! 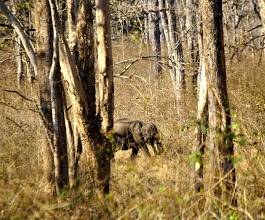 Hunger pricks. "No good hotel nearby" - Says Mr Prakash. Atlast Nanjangud is where we had our lunch-cum-evening snacks. A beautiful Mysore Palace stood even more serene with all the lights lit on a sunday evening. I was dumbstruck with what I saw - Tiny bulbs around the castle reminded me of the fairy tales watched on cartoon network. No wonder it still stands as a beauty of the state.

3 hours of more fun and tiredness brought us back to Bangalore.

This was a long pending post drafted in February 2013.
By ಅಶ್ವಿನಿ/ Ashwini 3 comments: