Halloween is here! Oh no .. are the days spinning faster than it should. I remember the Halloween of 2009 crystal clear. Admiring the colors of fall in West coast of the states , walking down in the chill weather with a camera in my gloved hands, trying to capture the beauty of nature, accompanied by a friend who was even better when it comes to photography.

The very thought of Halloween brings back so many memories of the far land that was my home for a year. The trick-or treat was the best part when kids from the neighborhood knock at your door threatening you to hand over candies else to be ready for their mischief and pranks.

Its Halloween and how can you forget Yellow pumpkins. I remember the carvings made of them and placed in all the shopping malls and markets. I could find a click of uncarved huge pumpkins and here it is. 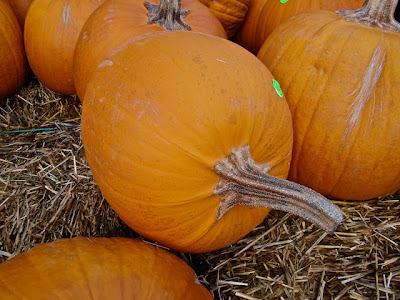 Navraatri - "Festival of Dolls" is what I have known this festival for however it is literally translated to "Nine Nights".
I come from one of the southern states of India ~ Karnataka, where these 9 auspicious days are termed collectively as a festival of the state - naaDa Habba ~ Dasara.

This year's Dasara was special for me for a simple reason that it was the first festival I celebrated at my in-laws.[So that gives away the reason for my absence from blogging arena].

I had no time to set up anything great but did not want to let go the festival dry. So finally managed to find the Royal wedding dolls[Pattada Gombe ~ as we call them ] - which denotes the bride and groom from Mysore empire. I love the way they are decorated. The lady is adorned with a red saree and the jewels neatly placed  made her look more than perfect. The groom wears a mysore peta to match his silk kurta and dhoti.

Navaratri in Karnataka is not just about the pooja and rituals but more of fun and activity. In several homes  the dolls are collected year after year and arranged in a fashion that it speaks a story by itself for all its viewers. School kids have their mid-term vacation. The older generation pour in information from history and mythology while they involve the kids in the process of decorating and prepping for the Navraatri. That's how the facts trickle down the grape vine. Every evening there is a pooja done for the Dolls set and the prasad [naivedhyam] is distributed to all the kids who visit  to see the dolls.

This year I've planned to make 9 different variety of savories/sweets, 1 each day. The first day I made Coconut barfi - a simple Indian delicacy. Here is a click after the pooja on the third day day - thats when I made KodubaLe. 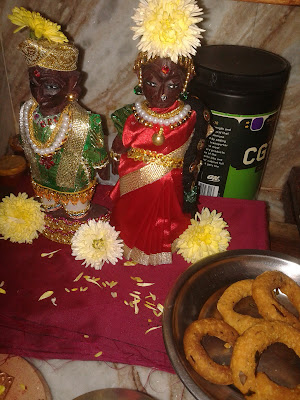 Technology and its fate.


There was a time when owning a transistor was termed a luxury. Then came in the radio, television, telephone and then the era of mobile/Cell phones evolved.

Today even a school going kid holds a fashionable latest model cell phone. So that is where the technology stands in today's world.

When I talk about mobiles I don't miss an opportunity to mention the brand that ruled the market until recently in the mobile world ~ Nokia. I prefer them even though I don't own one today. The sturdy break-free phones if ever manufactured, it is from the Nokias. How many of you remember those initial days phones which resembled the cordless phones - huge and bulky. I don't have to mention the call cost . Hell we were charged even for the calls we received. Forget about getting charged for receiving calls, we even had to shell out for the messages received. Do you believe that. You have to!

Now why did I start writing about the mobile phones...
After seeing the below picture I don't have to explain much. These two cell phones are owned by the same colleague of mine. He does not want part with the one that's glittering all blue, however he is in love with the Samsung galaxy tab he bought recently :) 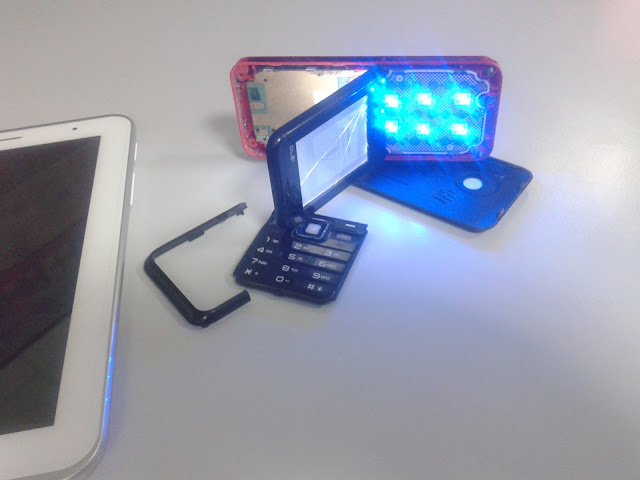 
I know I've been completely off from blogging.. Past couple of weeks have been hectic - both in my personal and professional front. Will be back soon with all the pending stuffs I need to rant about.

Dropped here to say a hi to all those friends whose blogs I crave to read. I'll be hopping there soon.

I'd like to share a photo from one of my archives till I get back to routine blogging.

This photo was clicked on my mobile. A rainbow on the wheel is what I call this capture.A busy market lane, on a Saturday evening is a feast for any amateur photographer. I'd love to head back to those streets with my camera. 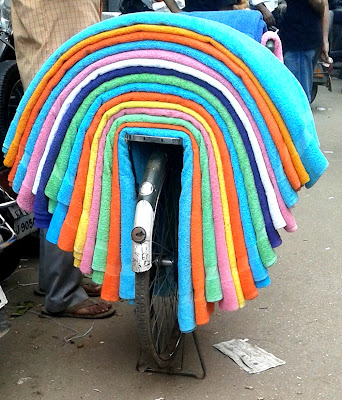