This was not any usual Saturday. The peculiar feeling in the morning I woke up had something in store for sure. As I gulped the morning coffee, I was quite not getting the instinct of what this feeling actually was. I was gazing at the newspaper headlines and my mind started rewinding to a few episodes behind its current scene. After a while it came to a sudden halt at my office desk.

"It was a lazy Friday (a day before this feeling started creeping in), the long weekend of Thanksgiving in the other shore, keeping the day as dull as it could be. Not a task to complete, no emails to read or forward. Sense of boredom prevailed everywhere.

I am not the one who can idle away the time to waste gossips about the daily K-soaps or otherwise, so be it work or something productive, wanted to utilize all the minutes on hand into things that would keep my mind working before it rusts.

I sat at my desk thinking what next to splurge on, I blindly open the home page - Google the master for anything to start with. In hunt of some good articles I sat in front of the tube watching the grey/blue alphabets on the white monitor running down into many pages. While doing so a tiny image caught my attention right away. The Google was dressed with pie and cookies to mark the turkey day as otherwise known as the Thanksgiving Day. A click on the colorful pumpkin pie took me to a page which described the procedure to make it with ease. Few more clicks led me to a whole bunch of low calorie desserts for a prefect weekend. My eyes spotted a simple banana treat - Java Banana.

A lot of chef programs running on the television sets these days keep many foodies glued to their idiot boxes, when on air. Am one of the food lovers from both ends - maker to the eater. You get it right; I was already trying out the recepie mentally and preparing for it. The next thing I started doing without any hesitation - write down the quantities of all the ingredients that would go into making of the tasty and beautiful to look "Java banana". Wondered who named it so? And why? Was it something to do with the coffee beans or the Java beans? Who cares if it’s called "Java" or "Cobol" or "Scada" when you have a delicious dish in your mouth to cherish at the end of your meal, "........

As my mind limped to the present, I saw a few bananas lying in the fruit basket on the dining table. Not hard to guess my next move. I was already planning to start the process. Asked mom if all the ingredients were available at home or if there was a need to make a quick visit to fetch them from the nearby grocery. Not much to my amaze everything I needed was a hand length away.

Trying a recepie for the first time is indeed fun in its own variety. This case was nothing different. My sister joined the journey and we had to go the road three times to reach the final destination. We had peels off the sturdy banana, cut them into slices as prescribed. Made some fresh brewed coffee to add its aroma well blended with the vanilla extract. And there we go - the cooking begins. 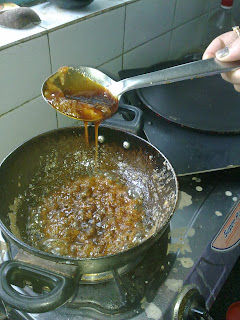 First try ended up in the making of the famous Lacto king chocolates' prototype :) which in no way matched to something that was anticipated. This was the result of a wonderful idea of using powdered sugar that came handy instead of the crystal sugar.

We had to go into the restart mode. The measuring expert - Me, got 6 tablespoons of sugar straight into the hot pan that melted a tablespoon of cooking butter. As the liquid got to its flowing state, sliced banana jumped into the bubbling mix and syrup bound to it very well. No Stirring was our mantra to keep the banana in its sliced form and not making it mushy. Finally to top this all, the brewed coffee with vanilla extract went in, to gel the mix to its right proportion. None of us knew the exact look of the final recepie, so was quite impressed with what was on the table.

My sister had a weird idea of adding a twist to this recepie, we revisited the second method all over again and the twist over it this time was a little sour and a little citric. She squeezed in about 4 to 6 tablespoons of orange juice to the hot sauce once the coffee vanilla extract was poured in. It indeed ranked the dessert superior among the three trials.
The tanginess hit first and then the sweetened caramel banana touched your taste glands, making the recepie an ultimate Saturday special.

The main ingredient for our main recepie was ready to make its way into the serving bowl. I also ensured that a scoop of vanilla ice-cream rested in the refrigerator to make the dessert a little creamy, also to add its very own flavor. 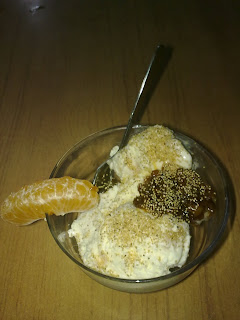 Credibility to another powerful ingredient goes to sis - pinch of fried and powdered Khus khus sprinkled on top. My creativity made its way and the dream dessert - so called Java Banana was served, presentation not taking a back spot either. It was absolutely delicious and definitely worth the effort.
By ಅಶ್ವಿನಿ/ Ashwini No comments: